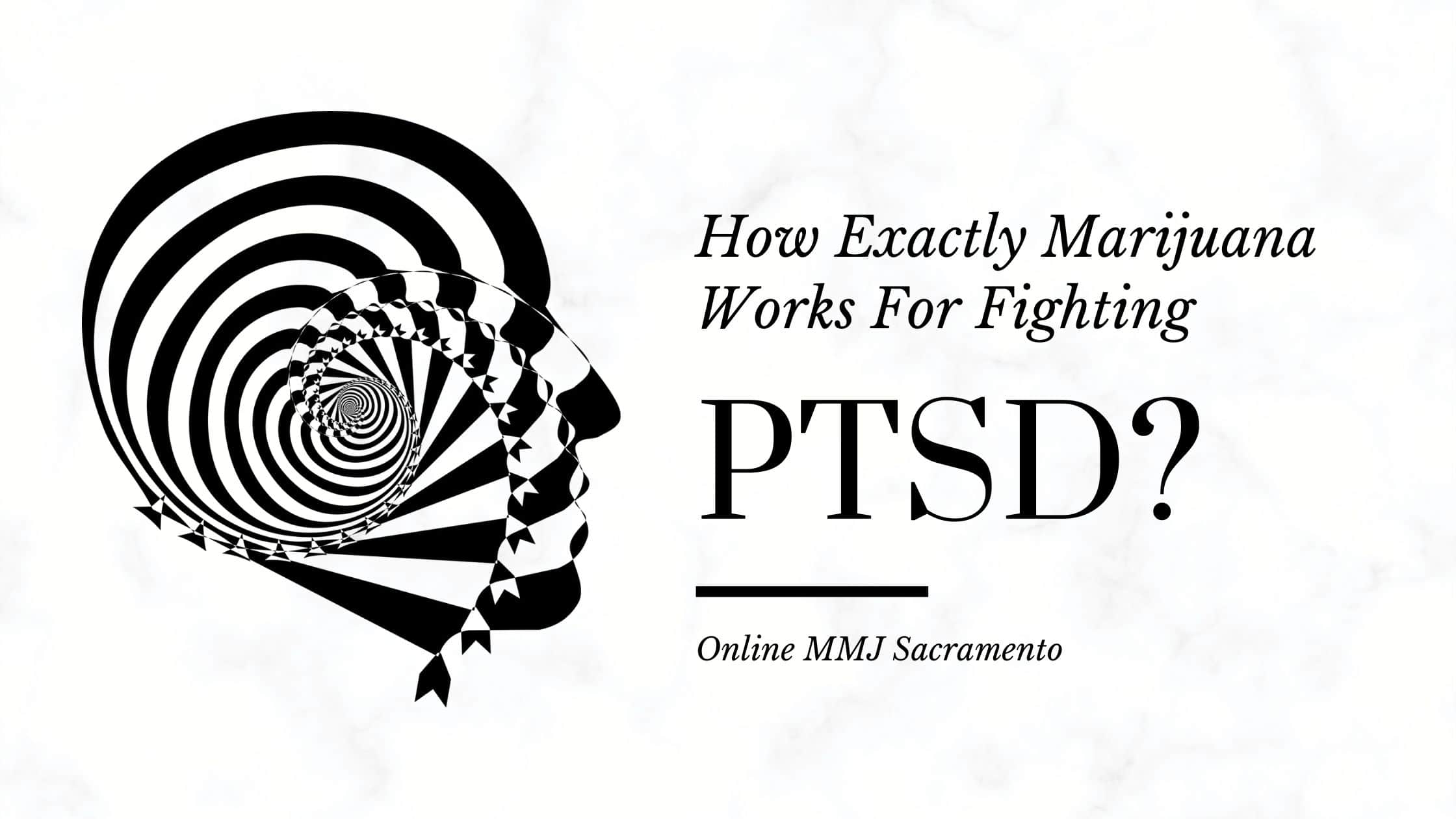 PTSD (Post-Traumatic Stress Disorder) can result in negative thoughts about yourself and others. You may also experience sleep problems, stress, and anxiety. Cannabis can help PTSD patients alleviate symptoms. Over the years, more studies have been conducted to evaluate if marijuana treatment is safe. Currently, medical cannabis is legal in more than half of the US states & many are considering legalizing it. If you live in a marijuana legalized state like California, you can easily get MMJ recs from a 420 doctor Sacramento.

Read on to learn about the major symptoms of PTSD, how can cannabis help alleviate Post-Traumatic Stress Disorder, top strains & more.

PTSD is a mental illness, which is triggered by a shocking, traumatic event. Patients with this condition experience flashbacks and relive the events. In most cases, the symptoms are short-term. However, some patients may experience stress for a long time.

In the United States, about 70 percent of adults have experienced a traumatic event at least once at some point in their lives. And, up to 20 percent of them develop PTSD. The condition is common among veterans of military conflicts. The US Department of Veterans’ study confirms that veterans who served during the Vietnam era developed risks of PTSD—31 percent for men and 27 percent for women.

For treating PTSD, medical experts often prescribe antidepressants, such as Prozac, Paxil, and Zoloft, which can help in managing some of the symptoms. However, medications don’t work for everyone. In some cases, they may lead to side-effects, such as dry mouth, diarrhea, constipation, sexual dysfunction, and sleep problems. Psychotherapy can also help ease PTSD symptoms by teaching how to deal with it and restoring self-esteem.

Marijuana treatment for PTSD is effective. The best part is it doesn’t cause any side-effects as antidepressants and other medications.

Cannabinoids are chemical compounds present in the marijuana plant. Research says that the cannabinoids have amazing medicinal properties. For instance, CBD is known for delivering pain-relieving and anti-inflammatory effects.

CBD doesn’t directly bind to any of the receptors. Instead, it enhances the ability of neurotransmitters to bind to receptors, thus providing medicinal effects.

According to a study published in the Journal of Psychopharmacology, participants with PTSD who didn’t take marijuana reported a significant increase in major depressive episodes

Researchers have found that improper signaling of certain neurotransmitters (serotonin and glutamate) can lead to the fight-or-flight response. Cannabinoids in marijuana are effective in reducing painful memories. CBD is beneficial in turning off traumatic memories, thus easing PTSD.

A recent study reported that CBD can help improve blood flow in the brain regions involved in memory processing, such as the hippocampus. Clogged blood vessels in the brain is the sign of memory loss, trouble making decisions, and a decline in cognitive function. However, increased blood flow helps boost cognitive function and perhaps improve memory in Alzheimer’s patients.

Hippocampus is linked to storing and recalling information and easing fear responses. Any damage to the hippocampus can cause memory problems.

Cannabis compounds can help ease nightmares in patients suffering from PTSD. A clinical trial evaluated the effects of nabilone, a synthetic cannabinoid. Researchers noted that 72 percent of the patients reported a significant reduction in nightmare intensity or completely alleviated. Moreover, improvement in the quality of sleep, time, and reduction in daytime flashbacks & night sweats were also noted.

Related- Use Medical Marijuana to Sleep Soundly at Night

A review published in the American Journal of Health-System Pharmacists reported that cannabis helped military veterans with PTSD alleviate their symptoms. However, some patients reduced anxiety and insomnia.

In marijuana plants, there are more than 100 cannabinoids, each works differently. By combining the right levels of different cannabinoids, such as THC and CBD, you can receive desired medicinal effects for managing PTSD. In other words, you need to buy cannabis strains carefully. Here are some of the top strains for PTSD patients-

A balanced hybrid strain with strong euphoric effects. It contains 17-24 percent of THC while CBD content is between 0.1 and 0.2 percent. The strain is known for its amazing mood-boosting and anxiety-relieving properties. Blue Dream can also help improve energy and creativity levels.

A Sativa-dominant strain with CBD and THC ratio of 5:2. The strain has won several Cannabis Cup awards. Harlequin is known for delivering ultimate relief from pain, anxiety, depression, etc. Its amazing uplifting effects can help improve focus at work. The strain is also beneficial for managing pain and inflammation associated with fibromyalgia.

Pineapple Express can help PTSD patients boost mood, reduce stress and anxiety levels effectively. It contains 20 percent of THC and 0.1 percent of CBD content. The strain is perfect for relieving migraine and inflammation.

It offers full-body relaxation and improves focus. THC content is 20 percent while CBD content is around 1 percent. Master Kush helps manage sleep problems. The strain can also be used for boosting appetite, thus easing eating disorders such as anorexia.

To buy high-quality marijuana products from licensed dispensaries, you require a doctor’s recommendation. It shows that you are a valid medical marijuana patient. Now, you can see a 420 doctor Sacramento online using telemedicine technology. Once the doctor approves you, MMJ recs will be sent to you via email. Here’s the complete process-

Related- 5 Incredible Benefits of Having a Medical Marijuana Card

PTSD is linked to a traumatic event, which can be a rape activity, loss of a loved one, accident, etc. Patients with this mental illness often experience flashbacks, nightmares, and lack of focus. Marijuana can help in easing PTSD symptoms, such as mood swings, sleep problems, etc. Recent research shows that CBD can help improve blood flow in the brain regions involved in storing and retrieving memories, such as the hippocampus. THC binds to CB1 and CB2 receptors in the brain, thus managing certain symptoms. Top strains for fighting PTSD are Blue Dream, Harlequin, Pineapple Express, and Master Kush. For managing your symptoms effectively, make sure you dose the herb properly. However, it’s good to start with a low dose, let’s say 5 mg of cannabis edible, and increase the dose gradually.

See a 420 doctor Sacramento online to get MMJ recs in 10 minutes.