How Marijuana For ADHD Works? [Explained by MMJ Doctors] 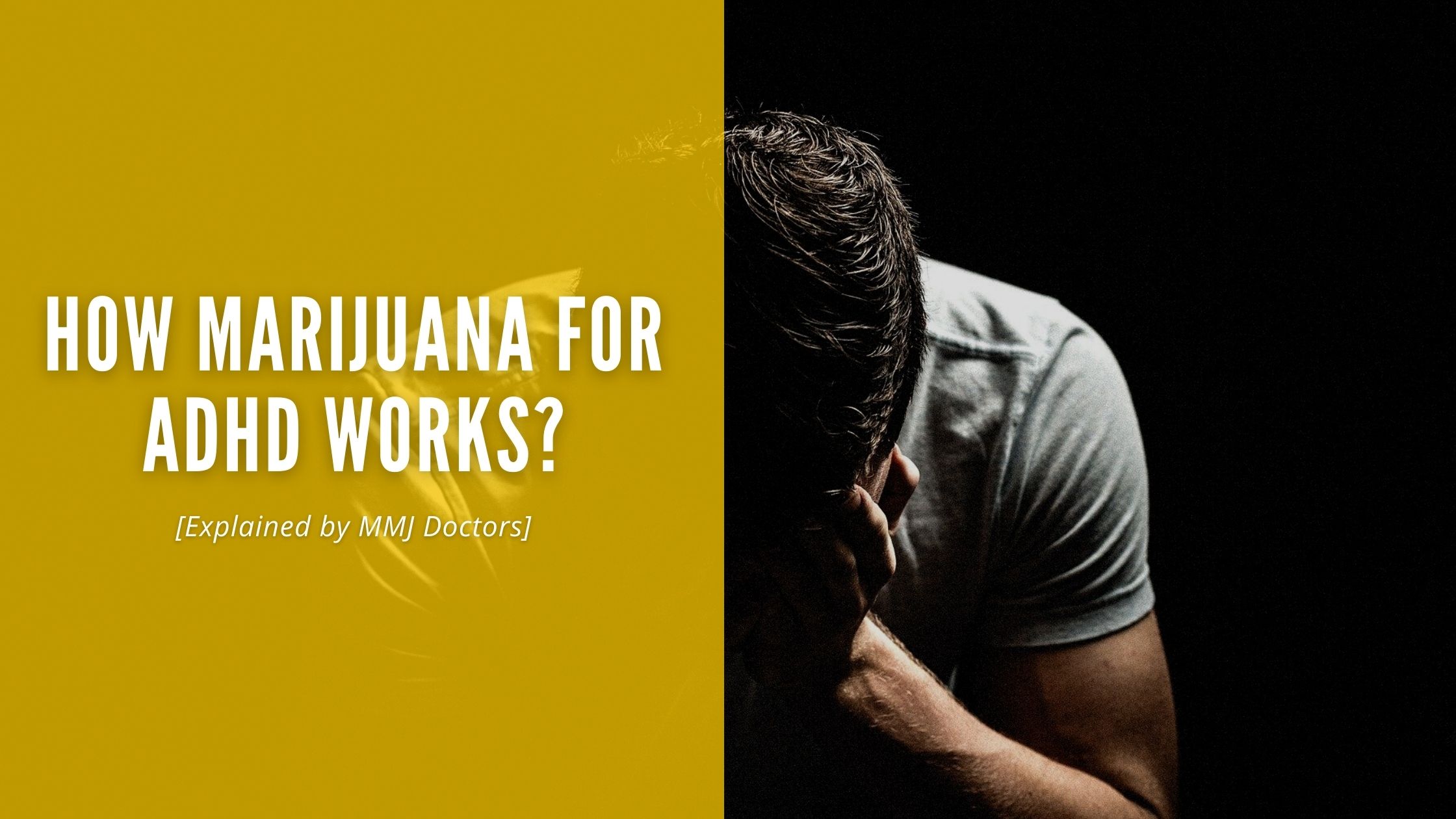 How Marijuana For ADHD Works? [Explained by MMJ Doctors]

Cannabis has gained popularity for its amazing therapeutic properties. And, legal marijuana sales have significantly increased over the past few years. In fact, the Grandview Research projects that the global market size of the marijuana industry is expected to reach $73.6 billion by 2027.

Studies say that marijuana can help reduce ADHD symptoms. Is cannabis use safe? How does it work? How to get a recommendation from an MMJ doctor online? Let’s discuss.

What is ADHD & What Causes it?

ADHD stands for Attention Deficit-Hyperactivity Disorder. It’s a neurological condition, which is common among children. The CDC scientists in 2016 estimated that6.1 million American children aged 2-17 years had been diagnosed with ADHD.

Patients with ADHD often have low self-esteem, and troubles completing their tasks, focusing on work. However, symptoms may vary from patient to patient, and they also change with age.

There can be various causes of ADHD. Research says that lower activity in the brain regions associated with attention can lead to ADHD.

Moreover, this medical condition can run in families. If your parents have ADHD, you are likely to develop it.

Marijuana For ADHD – How it Works?

Marijuana can help ADHD patients ease their symptoms effectively. Chemical compounds in the herb are effective in improvingsleepconcentration and reducing impulsivity.

A case study found that taking THC orally delivered positive effects on behavior, performance and mental state on a patient with ADHD. THC is a psychoactive cannabinoid, which binds to CB1 and CB2 receptors in the central nervous system and the brain.

Moreover, CBD can help reduce anxiety. Patients with ADHD often miss work deadlines, which can cause stress and excessive worrying. And, fear of completing tasks can result in anxiety.

Marijuana can ease attention and motivation issues. Some ADHD patients say that marijuana helps them relax and improve focus. Cannabinoids can reduce levels of anxiety and stress by interacting with the body’s endocannabinoid system.

According to a German study, cannabis can decrease impulsive behaviors in adults with ADHD. Additionally, cannabinoids can boost sleep and concentration. 73 percent of the participants preferred marijuana treatment for managing their symptoms.

Can You Replace ADHD Medications With Marijuana?

Both marijuana and medications, such as Ritalin can be helpful in reducing ADHD symptoms. But, the benefit of using cannabis treatment is that patients can avoid side-effects associated with medications.

If you are considering replacing ADHD medications with cannabis, seek professional help. Get a recommendation from an MMJ doctor and buy high-quality cannabis from licensed dispensaries.

Related- What to Expect During Your First Medical Dispensary Visit?

Are There Any Risks?

Long-term marijuana use may affect brain development and increase risks of depression. Moreover, it can result in chronic bronchitis.

In a study published in 2013, researchers analyzed the effects of marijuana use on ADHD patients. Marijuana usersperformed worsein decision-making, memory, cognitive and verbal tests than non-users.

Extended marijuana use can lead to cannabis use disorder. It’s characterized by cravings to use cannabis, taking higher amounts of cannabis or difficulty quitting cannabis. CUD can affect performance at daily tasks

Children aged 7 and 9 are more likely to develop dependence issues. A study published in 2016 found that about 45 percent of the individuals seeking CUD treatment were diagnosed with ADHD.

Getting an MMJ Doctor’s Recommendation & Using Marijuana For ADHD

If you want to use marijuana for ADHD, you need to get a medical marijuana card from an MMJ doctor. With the card, you can legally access medical dispensaries around you to get high-potency products. In California, medical users are allowed to possess up to 8 ounces of dried flowers or concentrates.

Related- 5 Benefits of Getting a Medical Marijuana Card Sacramento

In this digital era, it’s very easy to see an MMJ doctor online and get your recommendations from home. At Online MMJ Sacramento, you can apply for a marijuana recommendation in just 10 minutes. The process is-

After getting a marijuana evaluation, you should buy cannabis products with optimal cannabinoid levels for managing your symptoms. Moreover, select the right method of delivering cannabis into the body. The available options are-

If you want to use marijuana for ADHD, buy the right strains and dosage. You can try different cannabis products and see what’s working for your condition. It’s good to seek professional help from a licensed doctor regarding cannabis use for ADHD.

See an MMJ doctor to get your medical marijuana card today.